This site uses cookies to provide and improve your shopping experience. If you want to benefit from this improved service, please opt-in.
More Info
Save Preferences
SELLING WORLDWIDE SINCE 2001
Menu
Uncategorized

Happy Birthday to a music icon.

Sometimes, that word “icon” gets thrown around way too much. It absolutely applies here 100% – a man who revolutionised Rock and Roll, and one of the main people we can thank for how music in the modern world has been shaped.

From iconic tracks such as “Roll Over Beethoven” and the instantly recognisable “Johnny B. Goode”, Berry has provided many hits that not only have been covered plenty of times over the decades, but have been so instrumental in influencing all our favourite rock legends following on from him.

Even to this day, Chuck has no intention of laying down his Gibsons – in fact, he announced his first album in almost 40 years yesterday on his birthday! “Chuck”, dedicated to his wife of 68 years, will be released in 2017 and we can’t wait for it!

Some of the world’s biggest names over the decades have got involved with the Chuck Berry’s legacy:

Sadly no longer with us is T. Rex’s frontman Marc Bolan. However, here’s one man who was inspired by the Rock and Roll legend of Chuck Berry – sporting a red t-shirt with one of Chuck’s famous poses, along with his autograph over the top.

When two icons like that come together in such an epic way, there’s no way we wouldn’t love it! It’s a great t-shirt, available in store here.

It’s not just all about the music industry though, as some of the best films ever made feature Chuck Berry too! 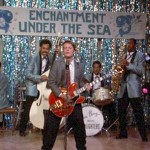 Marty McFly plays “Johnny B. Goode” in the original Back To The Future Film.

Back To The Future: Enchantment Under The Sea

Following Marty’s successful job in saving his parents’ love life (and in turn himself), McFly can’t help but introduce the prom-goers to a rendition of a song they’ve yet to even hear – Johnny B. Goode. Turns out Marvin Berry (who just happens to be Chuck’s cousin *ahem*) hears this, so lets Chuck hear it over the phone. Thank goodness Berry decided the wacky solo at the end of Marty’s version wasn’t needed!

Pulp Fiction: You Never Can Tell

Even (our opinion, of course) one of the greatest films to have ever been made had to feature Chuck Berry. This time, “You Never Can Tell” – as Vincent Vega (John Travolta), who has been asked by Marsellus Wallace to escort his wife Mia (Uma Thurman) do the twist to the classic track in the 1950’s themed-bar Jack Rabbit Slim’s. Sure enough, their moves are good enough to win them the trophy. The joy and fun soon stop after when Mia overdoses at Vincent’s place. Awkward way to celebrate.

That’s just a few small influences Chuck Berry has provided among countless others throughout his 90 years – and there’ll be plenty more to come – check out our Chuck Berry influenced designs here!