This site uses cookies to provide and improve your shopping experience. If you want to benefit from this improved service, please opt-in.
More Info
Save Preferences
SELLING WORLDWIDE SINCE 2001
Menu
Retro Music

Incredibly, today marks 40 years since the passing of one of music’s biggest icons – if not THE biggest of them all.

Everyone knows Elvis Presley. The Mississippi-born star is responsible for the evolution of the popular music scene we all know and love today – the leading figure in the rock ‘n’ roll world, his chart successes and media appearances across TV & film speak for themselves.

His 1956 debut “Heartbreak Hotel” was a #1 hit in his home country of America, and a #2 single here in the UK. From there, it was no stopping the King: 21 UK number one singles, a further 55 top 10 singles and another 63 top 40 hits to boot. Add to this 13 UK number one albums, another 38 top 10s AND a further 41 top 40s… and it’s safe to say he dominated the music scene. And that’s just in the UK! His continued success, even beyond his passing, is something of legends: Having reached #1 in the albums chart in 2016 with “The Wonder Of You” (re-recorded workings of some of his biggest hits with the Royal Philharmonic Orchestra), it marked the biggest gap between #1 albums for any artist – his first coming some 60 years previous! Knowing the love for Presley, it’s safe to say this will grow with a further release later on down the line… 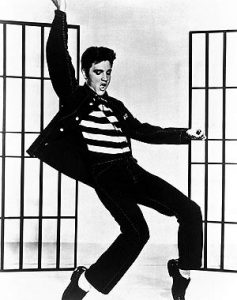 Elvis Presley at a photo shoot for Jailhouse Rock.

Only a few years in to his professional music career, Elvis was drafted in to the military – but would resume his recording career again in 1960. On top of this, he would also be involved in many Hollywood films (and creating the soundtracks to them) – not too dissimilar to what Cliff Richard was doing over in the UK at the same time.

Back in those days, Elvis’ performances was far from the norm – and it caused quite the controversy. So much so, the FBI’s director J. Edgar Hoover received an urgent letter from a local Catholic newspaper in Wisconsin, stating Presley was “a definite danger to the security of the United States” following his performances there. Their reasoning? “Indications of the harm Presley did just in La Crosse were the two high school girls […] whose abdomen and thigh had Presley’s autograph”!

During his divorce in 1973, his health began to deteriorate following addictions to prescription drugs. Although he would have good and bad periods over the following four years, Elvis eventually passed away on August 16th, 1977 at the age of just 42 years old.

Elvis may have left the building, but the King lives on forever.